Hello everybody. Andrew here again, with LawnCareMarketingExpert.com. Welcome back. Just have a quick update for you today. I wanted to bring something to your attention.

You might have seen it in the news, but probably not, if you are not as big as geek as me and my team are. Yelp recently set up a sting to catch people buying fake Yelp reviews. If you search ‘buy Google reviews, buy Yelp, reviews,’ whatever review site that you might be on, you can find somebody who has a bunch of bots that will post some fake stuff on your behalf, if you pay them enough money. We never use shady companies like this. It is a terrible idea, and the Yelp sting recently proves that fact.

As you know Yelp is more and more important, it is heavily integrated into the iPhone 4, and even more so in the iPhone 5 which has a huge number of users behind it. It powers the new Apple Mac’s application; all that data comes from Yelp and about two other different sources, so it is an important place to have your business listed, and an important place to get reviews, we have mentioned this before.

What Yelp did is they set up a sting, they set up some fake site selling Yelp reviews, and business owners went to these sites that were hosted by Yelp, put in their credit card information and asked Yelp to leave them, unbeknownst to them it was Yelp they were talking to, fake reviews on their Yelp pages. What did Yelp do? Yelp put giant badges on their pages saying, ‘This business owner tried to purchase fraudulent Yelp reviews.’ That badge is going to stay on their page for at least three months. Imagine what that is doing to their business. When prospective customers come and visit their Yelp page, they are going to see these people, this company is a dishonest company it, is trying to game the system, it is trying to post positive reviews that it has not actually gotten. Keep that in mind.

If you are a client of ours currently, you know that we give you a step-by-step strategy that we expect you to implement in your business to get reviews and testimonials, both of which are very powerful credibility and trust building social factors that come into play when somebody is deciding between you and your competitor. There are no shortcuts. I say this time and time again; there are no shortcuts in a proper white hat search engine optimization campaign. There are no shortcuts to getting real reviews and testimonials from real customers. You have to put in some work, and if you put in the work it pays off. If you take the shortcuts, your website gets banned, you disappear from Goggle, you get stung by Yelp, and you get a bad reputation. This is what happens when you take shortcuts. 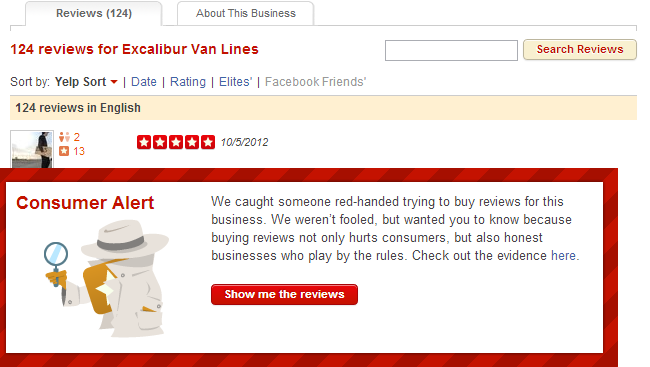 Do not take shortcuts. Hire a company that does things legitimately, or if you are trying to do things yourself, do it legitimately. If you are leaving reviews on Google, if you are posting five reviews from the same IP address to try and game the system, you are going to get caught. You are going to have your ranking of your Google Place page, your Bing local page, whatever, that ranking is going to fall when you try and game the system like that. Google is not a company that I would want to outsmart. Do not take the shortcuts. Talk to your customers. I guarantee you, if you are doing good work; you have plenty of customers that are really willing to give you good reviews and good testimonials. Make it part of your follow-up strategy, when you follow-up with your customers, ask them how your service is doing. You are going to get positive comments, that is your opportunity to ask for that review or testimonial. Do not take shortcuts, put in the leg work. I am sure you have plenty of good reviews. Your clients have plenty of good things to say about you.

That is all I wanted to say. Have a great day. Best of luck to you. See you again soon.

How to Get Customers for Lawn Mowing – Use Reviews & Testimonials

Andrew Pototschnik is the founder of Lawn Care Marketing Expert, the largest online marketing agency in North America specializing in marketing strategies for the lawn care and landscaping industries.

About Andrew Pototschnik
Join 10,456+ Lawn Care Marketing Expert Subscribers and Make More Profits
Online Marketing for Lawn Care Companies
FREE video shows you where to start and how to scale!